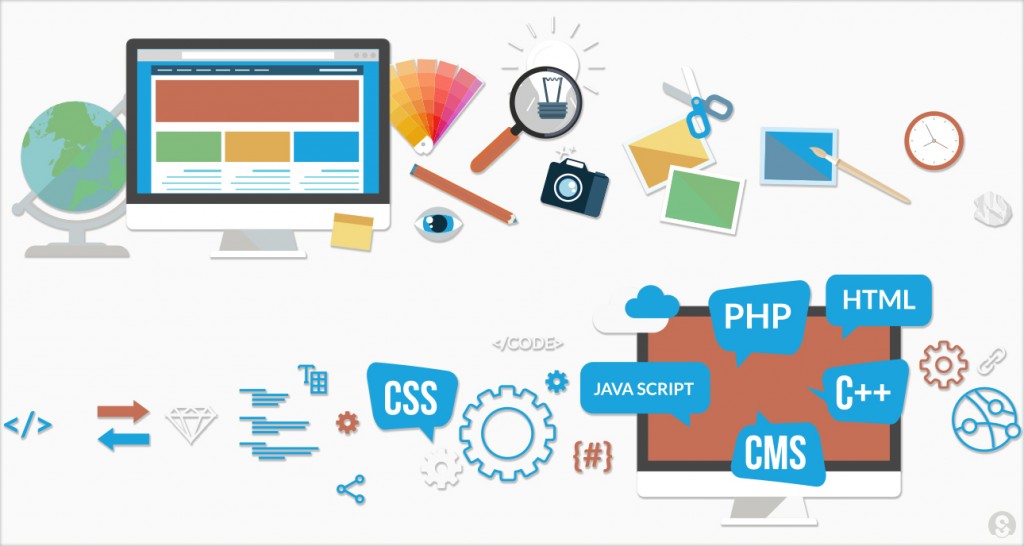 In this post, we’ll show you the difference between web designers and web developers. This will help you figure out whether you need to hire a designer or developer for the website you want to create. We’ll start off by defining both professions. Then, we’ll continue by taking a look at how they work together. We’ll also share the average hourly rates you’d need to pay to hire a web designer or developer. And to top it off, we’ll discuss how both professions overlap.

Definition – What’s The Difference in Theory?

Web designers keep themselves busy with everything that has to do with the aesthetics of a website. Besides that, usability and user experience while designing are equally as important, if not more important. Web designers don’t just ‘design,’ they have to think about a lot of things during the process. A few of those things are the current trends, the design norms and foremostly, the target audience behavior. It’s not just about what’s appealing to the eye. In most cases, it’s more about what kind of designs will help trigger the right actions from visitors. And when all that is researched and analyzed, the design has to match the branding of the company in question as well.

So, it goes without saying that being a web designer is as much about designing as it is about psychologically understanding what you’re designing and making sure it will do what’s expected from it. It’s an addition to great company branding and helps create another funnel for companies.

A web designer usually handles the first stage of creating a website. They think about what a website needs and how it needs to be set up. This information is vital when being passed on to a web developer.

A web developer contributes to the second stage of creating a website. When the entire structure and expectations are set, a web developer can start putting things into practice. And even here, you can have different types of web developers as well. When hiring or becoming a web developer, you can take your pick between these three options:

How do They Work Together?

Web designers and developers work closely together. Both specializations contribute to the bigger picture which is having a website up and running that matches the client’s needs. If a web designer and a web developer are working together, they usually start off with a detailed briefing. This briefing is a crucial part of the entire process. If the communication between a web designer and developer isn’t on point, it will lead to misinterpretation and bad UI.

A web designer usually shares the following information with a frontend web developer:

But if you want a web designer and developer to be entirely on the same page, it’s recommended that the developer is somehow involved in the design process. That doesn’t mean you have to involve the developer in every step of the way, though. It can really help to include them in initial brainstorming and design reviews, for instance.

Now, depending on the type of website you create and the budget you have, you might not be able to afford to hire both a web designer and developer for a project. If that’s the case, you might want to go with a so-called ‘hybrid’ designer or developer. These hybrids are involved in both design and development and can help you set up a website from scratch, both design and development wise, in no time. They often work with CMS platforms, such as WordPress, as well. It allows them to finish a website quicker and it can help keep the client within his budget.

How Much Does Hiring a Web Designer or Developer Cost?

If you’re hiring freelancers to create your website, you better do it right from the beginning. If you pay peanuts, you get monkeys. Hiring the wrong people for the job can end up costing you a lot more afterwards. A decent web designer charges around $40-$75 an hour to design a website. Web developers can go up to $150 an hour.

The price difference between developers and designers has a lot to do with the knowledge and experience someone needs to have to get started. It’s easier to get started as a web designer than it is to become a web developer because of the starting barrier. A web designer will typically need to know his or her way around UI design principles (design), target audience behavior (marketing) and graphics software (such as Photoshop and Illustrator). Although these aren’t easy to become specialized in, they are not as science-oriented as developing is. Being a web developer includes being a pro at solving problems, creating algorithms, coding in multiple languages and more.

Why Understanding how Web Design and Web Development Overlap Matters

It’s important to know why you’re hiring a designer or developer and what you expect from them. Are you willing to hire both to create your most desired outcome? Or are you willing to put all your eggs in one basket and choose someone who does both and uses a CMS platform, such as WordPress, to do it? If you go for the first option, you can entirely have it your way. If you go with the second option, you will definitely pay less.

In bigger companies, the separation still remains. They usually work in teams of designers and developers with each their specialty. This has its benefits. When having a team of specialist in specific areas, everyone can stay up to date with the latest trends and evolvements, leading to a more qualitative end product. But the ‘gap’ between developers and designers has become smaller. More and more, you can notice web designers diving into code and web developers diving into designing. Not necessarily to become a hybrid, but rather to become better at the specialization they already have.

When you decide to outsource creating a website and you want to hire freelancers, you’ll most likely wonder if you should hire a web designer or developer. These two professions are often mixed up although they have a completely different skill set. To create a website, you’d technically need both. But there are many people out there that offer both services at the same time. In this post, we’ve handled some of the differences between web designers and developers and gave some thoughts on how they work together.

We like what we do. All day. Every day.

Get to know WebWorx, Inc.

Incorporated in 2002, and growing stronger every year in the web design and development business, WebWorx, Inc. has worked with many of the top branding and marketing agencies in the Richmond, VA area and valued clients, both large and small – locally, nationally and internationally.

WebWorx  builds dynamic, feature-rich, WordPress websites customized for your business or organization. Our team of talented WordPress developers and designers are highly experienced at engineering WordPress and working with it’s supporting technologies. We respect human factors and organizational factors that go into managing a website. Each WebWorx WordPress website is tailored to fit your company’s unique set of operational requirements, creating an easy to manage website designed to grow with your business.

Our clients are small businesses, organizations, non-profits, local, county and state governments, and medium to large corporations. From businesses just starting out with no presence on the internet, to existing companies who have been around for decades, there are no projects too small or too large for the team at WebWorx and we can find a package that is right for you or your company.

Don’t think outside the box.
Get rid of the box.

Send us some love...